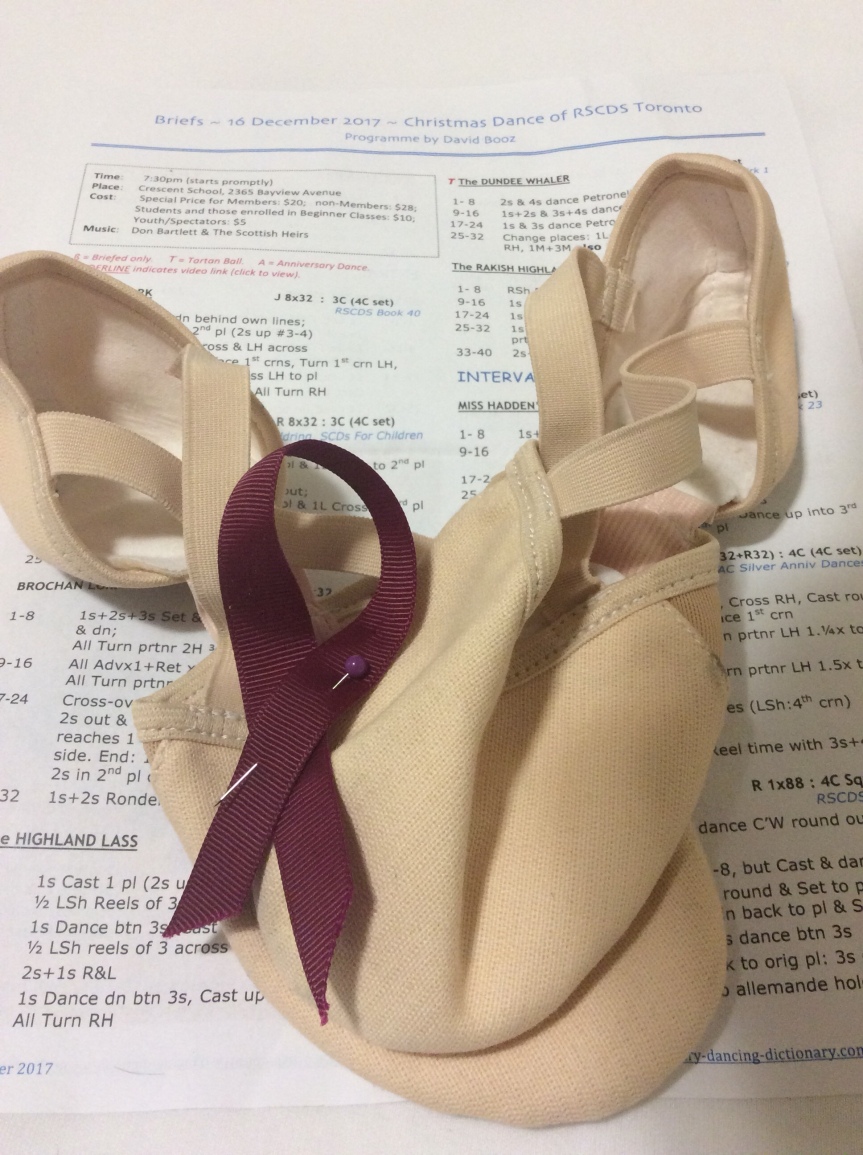 It’s not quite the middle of night by the castle clock, and there aren’t any owls, this being Toronto, but it’s certainly late enough. We spent the evening out at the Christmas Dance for Toronto’s Scottish Country Dance set, and only sat out two dances. To say we’re still beginning, and didn’t know them all, that’s no small thing. We muddled some, and we stumbled through a few, but we’re terribly proud of the fact that we negotiated the Anniversary Dance – sprung on us a fortnight back without warning -almost without error. Our most egregious sin was slipping a right shoulder instead of left in a reel, and considering how confusing we found the dance when it first leapt out of the woodwork, this is a triumph of the highest order. Okay, it is if you’re us and if you understand about reels and slipping shoulders.

To make it make that much more sense to you, here’s our favourite of the dances to be getting on with. It’s a reel that goes to the name of Jessie’s hornpipe. They don’t here, as they did this evening, veer wildly into Christmas carols midway through, but no matter. At least our wittering will have a bit of context for you.

We’re relaxing now with Sleigh Ride tea, evidence that not all sweet teas are cloying. Hibiscus and beetroot make it pink, and there’s apple, cinnamon, and raisins in it among other things. Almond gives it a subtly nutty taste, and while this, like previous calendar teas in it, has coconut in it, it doesn’t overwhelm the tea. And because we lack a musical off-switch, we’re still humming Jessie’s hornpipe. It was the last dance of tonight’s set and a good note to end on.

Back in November when we went to a workshop, we were advised ‘Dancing is friendship set to music.’ This evening was a testament to that. We never wanted for partners, and whole sets were generous with advise, and gracious when we absolutely mangled the sequence. It’s a highly social thing, Scottish Country, which is why we love it so much. We’re not much good at improvised dancing. In fact we’re bad at all kinds of improv, whether it’s charades, dancing or those add-a-sentence stories. But Scottish Country Dance has steps, sequence, and always you’re in conversation with someone. Don’t know where to go? Look at your partner. Waiting in fourth place? Look up the set to the dancing couple. It’s not Austen’s dances exactly, but nor is it a far cry from them either. And dancing them, we can well see why so many of her set pieces hinge on dances.

With that in mind, here’s another Pat Batt poem, all about what to do when dancing. a Scottish Country Dance, and how to spot those of us who know what we’re doing (or even just look like we do).

If you ask the question
How to know a Scottish Dancer
It’s really very simple
For there only is one answer.

The easy way to spot him
Is his roving, rolling eye,
And if you don’t believe me –
Well, I will tell you why.

He has one eye on his partner
And one eye on the set,
He has to watch a lot more things
I haven’t mentioned yet.

He has to cover up and down
And watch his teacher too –
How else is he supposed to learn
The footwork he must do?

One eye swivels to his corner,
One eye squints along the line –
When he’s completely cross-eyed
The you know he’s doing fine!

And often you will notice
A fleeting, haunted glance –
That’s when he copies someone else
Who really knows the dance.

Well there’s the explanation – but
I’ll tell you one thing more –
There’s one place where he must not look –
and that is at the floor.

Back in Scotland the only way to end a dance was hands joined, singing Auld Lang Syne -crossed arms on the last verse. We didn’t do it this evening -Scottish Country is much too refined for that – but it doesn’t feel right to close the night without it. So here’s a second poem as we make up the difference. We bet you know it, but maybe not all the verses.

And surely ye’ll be your pint stowp!
And surely I’ll be mine!
And we’ll tak a cup o’kindness yet,
For auld lang syne.
For auld, &c.

We twa hae run about the braes,
And pou’d the gowans fine;
But we’ve wander’d mony a weary fit,
Sin’ auld lang syne.
For auld, &c.

We twa hae paidl’d in the burn,
Frae morning sun till dine;
But seas between us braid hae roar’d
Sin’ auld lang syne.
For auld, &c.

And there’s a hand, my trusty fere!
And gie’s a hand o’ thine!
And we’ll tak a right gude-willie waught,
For auld lang syne.
For auld, &c.