It’s that time of year again; another Advent season brings another month of tea and poetry. This year Advent is sponsored by Freezing Rain R Us, which has got the market cornered on making Canada look an awful lot like Christmas, and feeling like it, too.

It’s also the perfect weather for tea. Cue the calendar. 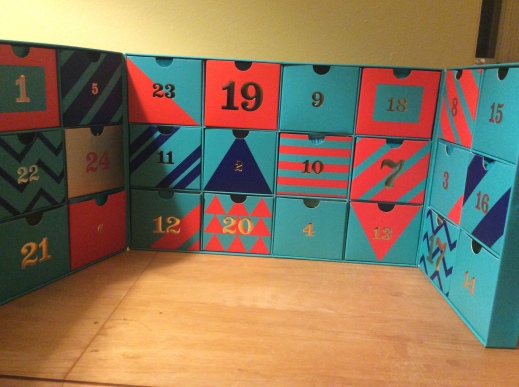 This year it’s even larger than previous lives have rendered it, and the boxes include not only supersized portions of tea but also gift cards. Today’s was $5 off any robois we happened to purchase between now and Christmas. Since this calendar has got us well stocked on tea into next Advent, the likelihood of me capitalising on this bit of generosity seems unlikely. But it’s a nice thought, calendar.

On to the tea, though Today’s selection is whimsically called Gingerbread Blondie, which makes it sound like some kind of traybake. And if you too made the mental leap to the sort of tea one Harmony Kendal, vampiric nuisance of Buffy  and lately the spin-off Angel the Series, might drink, you’re in good company. If not, no bother.

It’s a herbal infusion, and the ingredients promise apple, pineapple, mango, candied ginger and vanilla in some cocktail or other. Our first cup was nothing but ginger, and scent of vanilla. The second cup was nothing but pineapple, with lingering notes of ginger. It’s a problem we often have with these tisanes; they’re weak to start and then they’re overly sweet on the second cup. Pineapple probably shouldn’t be hot (we don’t care for it on gammon or pizza, either), and it definitely shouldn’t be floating around without the body of a caffeinated tea under it. Green, ideally, but an oolong or even a white might work here. It just needs something to get all the flavours in alignment instead of fighting for dominance like so many cats.

And speaking of, here’s a wee gem of a Christmas poem to start off the month. We’re skipping ahead a little bit with this one – it’s not technically Christmas yet, much less New Year’s – but it’s just such fun. Have a read and see if you, too, don’t come away singing this reworked carol for cats.

We Wish for the Family Goldfish
From Christmas Carols for Cats by John and Julie Hope, 2010

Of longing we sing, for food to appear;
We wish for the family goldfish to bring us good cheer!

In wonder we sing, why live food is here!
We wish for the hamster squeaking, a snack we revere.

The food that can talk we do not hold dear
We’re sick of the budgie chirping each day of the year!

Expecting something longer and grander?

Not all that glisters is gold, and we have a whole 23 days of poetry to get through. We’ll get there. Until tomorrow, a holy Advent from us, the Dawlish Dachshunds and Miss Marschallin cat. Who does not, by the way, wish for the family goldfish. Though we suspect she dreams of evicting the dachshunds. Shame it doesn’t scan as well.