We made a proper study of today’s tea for you. S’mores Chai is a pu’ehr blend with chocolate lacing it for good measure. The name was sufficiently confusing that we tried it with milk and sugar on the second cup; chai is just about the one tea that benefits from being milked and sweetened if you know how. So, we find, do chocolate teas, because the creaminess of the dairy works well with the chocolate pieces.

Not so this tea, which is much better plain. It’s not so much chocolatey (in spite of what it says on the tin) as it is spiced; there’s lots of cinnamon in there, and it risks being overwhelmed by milk. Mind, the sugar reemphasised it nicely, so while it doesn’t need it, it’s certainly a tea that might benefit from a bit of extra sweetness. And really, by the point you’re sitting down to a cup of pu’erh with honest-to-goddess pieces of marshmallow in the blend, is anyone keeping track of calories? Maybe that’s a quirk of ours. We never bother with hot chocolate either; we figure there’s no point in doing the thing by halves and make it properly rich. A similar policy works well with this tea, and you can bet we’ll be circling back to it.

Of course, the whole leisurely tea process offended the Dawlish Dachshunds, not least because they didn’t get to sample any. Honestly, they really do love chocolate! They think. They dream. They’ve never been allowed to sample any. So we’re making it up to them now with this charming poem dedicated to Dachshunds everywhere. And you thought we’d used up the Dachshund poetry quota! 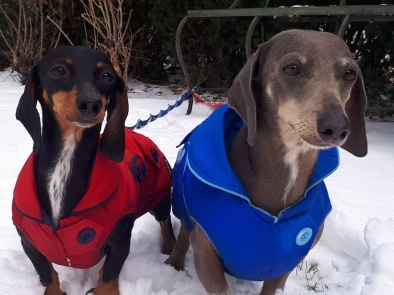 The Dachshund leads a quiet life
Not far above the ground;

He takes an elongated wife,
They travel all around.

They leave the lighted metropole;
Nor turn to look behind
Upon the headlands of the soul,
The tundras of the mind.

They climb together through the dusk
To ask the Lost-and-Found
For information on the stars
Not far above the ground.

The Dachshunds seem to journey on:
And following them, I
Take up my monocle, the Moon,
And gaze into the sky.

Pursuing them with comic art
Beyond the cosmic goal,
I see the whole within the part,
The part within the whole;

See planets wheeling overhead,
Mysterious and slow,
While morning buckles on his red,
And on the Dachshunds go. 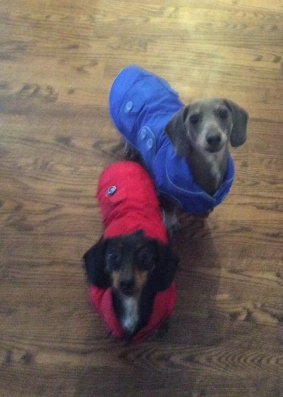