It’s Advent II, and St Nicholas Day. It’s the time of year when traditionally we bake Judy Plum’s (her of Pat of Silver Bush fame) Bishop’s Bread. Think fruitcake but loaf shaped and without the brandy or cherries. We put a marzipan mitre and crozier on ours to make it obvious it’s for St Nicholas, but that’s our touch.

Anyway, this auspicious liturgical combo was off to a tremendous start with the dual Advent offering of black tea Friesische Sonntags-mischung and rock sugar. As per traditional observation for this kind of Assam we poured it from a height worthy of a Muriel Spark character over the sugar and it crackled like ice. It’s a very satisfying sound, and the sugar lumps are a good size for counterbalancing the strength of the Assam. We opted for one lump per 8oz cup, and that worked perfectly. 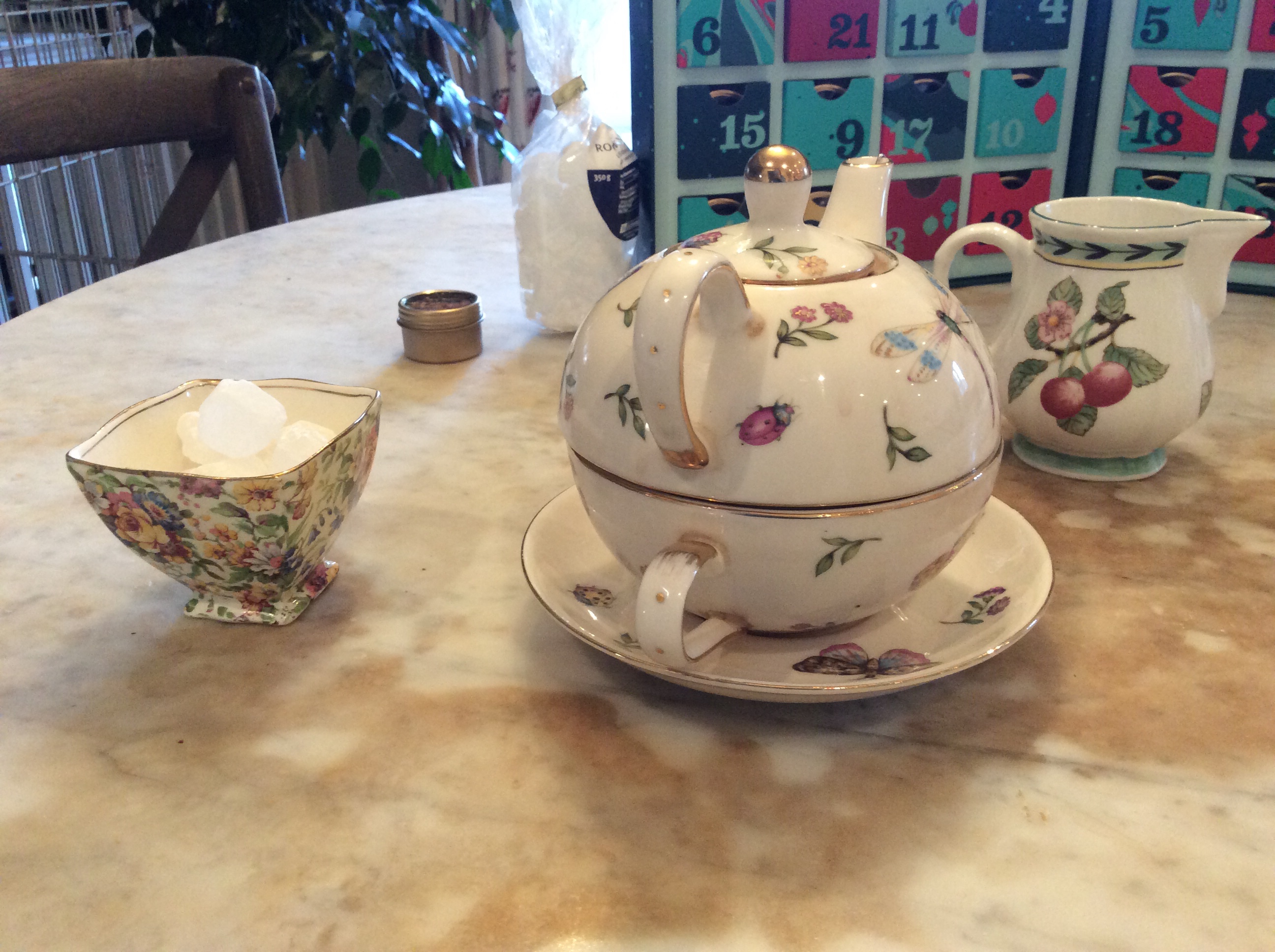 Even better, the sugar dish that has sat unused as a dresser ornament has found functionality.

The tea itself is Assam blend with a hefty amount of vanilla, which is exactly the kind of combination that appeals to us with black teas. Anything more complicated (cf the chocolate)can get complicated quickly. This one smells gorgeous, tastes just as good and was a suitably vestal start to the day.

DavidsTea swung completely the other way, with caffeine-free Gingerbread Blondie. An oldie but goodie, this tea is equal parts ginger and creamy vanilla. There’s a vanilla theme going here. But we like this one because it really does taste like gingerbread in a cup. The creaminess keeps it from being cloying and the ginger gives it zing. It’s a lovely tea for after dinner or in lieu of a sweet.

Here is where we’d usually leave you with a poem. But as previously mentioned, we miss singing, and today’s other tradition is to play Britten’s Saint Nicolas Mass. So here’s a selection from that. The men work harder than the women, but what the women do is terrific fun , especially for the sopranos. Listen and see if they don’t sound exactly like lightning!

St Nicholas Day used to find us baking Bishop’s Bread as recommended by one Judy Plum of Silver Bush. Today found us instead editing a treatise on visions and the nature of the soul for a client. It was a long essay and suddenly we looked up and it was late afternoon, so we forwent baking and had tea instead. We’d earned it.

Today’s tea was Silken Dragon Pearls, which is surely posh enough to send the price of this calendar skyrocketing. It brews a beautiful floral green tea though. It’s made from jasmine, is long in the mouth and has a wonderful smooth texture to it; the silk in the name is fairly won. Like any good jasmine, though, it makes for a pot you do have to watch if you don’t want it to turn bitter. We pulled the infuser out about five minutes in, but mileage may vary on that one. Understand, we grew up on breakfast blends, so never did get the taste for really strong green teas. We like ours somewhere in the middle, and if you get the measure of this one right, its a lovely, indulgent cup of tea.

As we’ve previously lamented, it’s nigh impossible to find good poetry about St Nicholas, because it’s all twee and weirdly saccharine, unless you really, really want The Night Before Christmas. But we tend to think the fun of that one is the illustrations you get with it in various compilations.

Instead, we’ll wrap up the accidental feline three-beat we’ve got going with a poem we alluded to at the start of the month. Miss Marschallin disapproves, because the title strongly hints that the cat comes to a sticky end, but it’s still good poetry.

Twas on a lofty vase’s side,
Where China’s gayest art had dyed
The azure flowers that blow;
Demurest of the tabby kind,
The pensive Selima, reclined,
Gazed on the lake below.

Her conscious tail her joy declared;
The fair round face, the snowy beard,
The velvet of her paws,
Her coat, that with the tortoise vies,
Her ears of jet, and emerald eyes,
She saw; and purred applause.

Still had she gazed; but ’midst the tide
Two angel forms were seen to glide,
The genii of the stream;
Their scaly armour’s Tyrian hue
Through richest purple to the view
Betrayed a golden gleam.

The hapless nymph with wonder saw;
A whisker first and then a claw,
With many an ardent wish,
She stretched in vain to reach the prize.
What female heart can gold despise?
What cat’s averse to fish?

Presumptuous maid! with looks intent
Again she stretch’d, again she bent,
Nor knew the gulf between.
(Malignant Fate sat by, and smiled)
The slippery verge her feet beguiled,
She tumbled headlong in.

Eight times emerging from the flood
She mewed to every watery god,
Some speedy aid to send.
No dolphin came, no Nereid stirred;
Nor cruel Tom, nor Susan heard;
A Favourite has no friend!

From hence, ye beauties, undeceived,
Know, one false step is ne’er retrieved,
And be with caution bold.
Not all that tempts your wandering eyes
And heedless hearts, is lawful prize;
Nor all that glisters, gold.

Here’s a nonsensical titbit for you; the poem was a favourite of a university contemporary who swore up and down Shakespeare nicked that last line from Gray. Looking at his dates, we have to disagree, but the man was unpersuadable. And for those wondering, Miss Marschallin would never drown in a bowl of goldfish. Not only do we not have them, she has minions for that kind of work. And the minions aren’t drowning either, because the Dachshunds have a healthy fear of the water.

Finally, because it’s St Nicholas Day, we’re leaving you with a bit of Britten. Here’s one of our favourites from his St Nicholas Mass. If you missed your chance to give it a listen today, there’s always tomorrow. It’s lots of fun and not overly long.

Didn’t I tell you it was fun? How can you resist a bishop that boxes Arius’s ears? Okay, that might just be us. Specifically it might be that essay on the nature of the soul getting to us. Still. The harmonies are excellent!